Part I: The Short-Term Outlook – A Strong and Accelerating Economy

Those who read our blogs know that over the past 6 months or so, we have turned positive on the underlying private sector of the U.S. economy.  We have had comments from several readers about this apparent change of heart, some of them almost in disbelief.  So, let us dispel any doubts.  There is a huge difference between the short-term and the long-term outlooks.  Let’s realize that long-term trends are just that, long-term, and that they take a long time to play out.  As you will see if you read through both parts of this year end outlook, our long-term views haven’t changed.  But, since the long-term doesn’t just suddenly appear, there really isn’t anything contradictory in being optimistic about the short-term.  As a result, we have divided this outlook up into its two logical parts, the short-term and the long-term.

Let’s start with the short-term.  First, at least through 2014 and probably 2015, the ‘fiscal drag’ that caused headwinds for the economy has now passed with the signing of the budget deal in mid-December.  In his December 18th press conference, Fed Chairman Bernanke indicated that four years after the trough of the ’01 recession, employees at all levels of government had grown by 400,000; but at the same point today, that number is -600,000, i.e., a difference of a million jobs.  Think of that when you think about ‘fiscal drag.’  The November jobs data shows that jobs at all levels of government have now turned positive.  No matter your view of the desirability of this, those employees receive paychecks and can consume goods and services.  So, from a short-term point of view, the ‘fiscal drag’ has ended, and, all other things being equal, this will actually spur the growth rate of real GDP.

The institute for Supply Management’s (ISM) indexes, both manufacturing and non-manufacturing, are as high or higher than they were in the ’05-’06 boom period.  This is shown in the chart immediately below.

Shown in the next chart is industrial production, which in November, finally exceeded its ’07 peak.

Now look below at the auto chart.  Sales are as frothy today as they were in the pre-recession boom.  Sales for the holiday buying period are destined to surprise to the upside.

Part of the reason that the economy is not overheating is housing.  The chart clearly shows that housing starts are significantly lagging their ’05-’06 levels.  But, recognize that ’05-’06 was the height of the housing bubble. 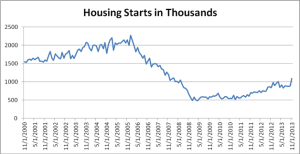 November’s housing starts surprised to the upside.  But, they are still only 53% of their bubble peak.  Nevertheless, because new home construction has been in the doldrums for the past six years, the resurgence evident in the economy has pushed the median price of a new home north of what it was then.  In addition, the lack of construction has put the months’ supply of new homes at less than 3.  In the housing bubble, when everyone was in the market, the average level of supply was 4 months.  So, in some respects, the current housing market is hotter than it was at the height of the bubble.  And, while interest rates have risen and are a cause for concern, they are still very low by historic standards, and we have a Fed that on December 18th recommitted to keeping them down for a period much longer than the market had anticipated.

Because the popular unemployment index is a lot higher today than it was in the ’05-’06 boom (7% vs. 5%), the popular media assumes that the labor markets are still loose.  But, demographics and incentives to work have changed over the past seven years.  The labor sub-indicators imply a much tighter labor market than the traditional unemployment index would lead one to believe.  Recent new nonfarm payrolls are equivalent to their monthly gains of ’05-’06.  The weekly Initial Jobless Claims number for the week ending 11/30 was 298,000.  Except for one week this past September, you have to go all the way back to May ’07 to find a number that low.  The first chart below shows the definite downtrend in new and continuing jobless claims.

The next chart shows that layoffs and discharges are lower than they were in ’05-’06 and that both the “Job Openings” and “Jobs Hard to Fill” sub-indexes are in up trends and are approaching ’05-’06 levels.

So, while auto sales are booming, the labor markets are tight, and manufacturing and services are expanding at or near boom levels, why do the aggregates (Real GDP, for example) appear so depressed?  One explanation that we think has some credibility, is that there has been an expansion in the underground economy (barter; working for cash, etc.).  The ‘fiscal drag’ headwinds discussed earlier, have, no doubt, had a large impact on the sluggish growth in the aggregates.  On a positive note, the latest revisions to Q3 ’13 Real GDP show a growth rate of 4.1%, which, on its face, supports our short-term optimism.  And until mid-December, the markets had discounted this as resulting mainly from growth in unwanted inventories.  But Black Friday and Cyber Monday sales along with upbeat ongoing retail reports tell us something different, i.e., the inventory growth was not unwanted at all.  While the markets expect a 2% Real GDP growth for Q4 ’13, don’t be surprised if it is much higher.

The underlying data, at least for the next 6 to 12 months, point to a strengthening economy.  Certainly, a stock market correction is possible.  We haven’t had one for more than 2 years.  But, while possible, a significant downdraft like those of ’01 or ’09, don’t typically occur when the economy is accelerating (1987 is an exception) without an extraneous and unanticipated shock.  With the signing of the first budget deal in four years, and with the Fed clearing the air about tapering and actually extending its announced period of zero interest rates, almost all of the short-term worries appear to be behind us, except one.

Inflation – The Potential Fly in the Ointment

The ‘official’ Consumer Price index (CPI) was flat in November, dominated, as it has been all autumn, by the fall back in gasoline prices.  Somehow, while we all know that everyday prices are rising at a significant pace, the markets have bought into the deflation theme.  Perhaps the belief is that if the markets play along with the Fed’s low inflation theme, the Fed will remain easier for longer.

In his December 16th blog, David Rosenberg (Gluskin-Sheff) has the following to say about inflation:

I have a tough time reconciling the ‘official’ inflation data with what’s happening in the real world… the .7% jump in retail sales in November on top of +.6% in October – these gains were all in volume terms?  No price increases at all?  Restaurants are now registering sales at a double-digit annual rate… No price increases here?  The BLS tells us in the CPI data that there is no pricing power in the airline industry and yet the sector is the best performing YTD within the equity markets…  global airline service fees have soared 18% in 2013… these [fees] are becoming an ever-greater share of the revenue pie and one must wonder if they are getting adequately captured in the CPI data.

Inflation could be the fly in the ointment for 2014.  As long as the markets play along with the Fed’s deflation theme, as we expect they will as long as they can, the economy and markets will do just fine (this doesn’t mean there won’t be a correction in the equity markets, as we haven’t had a meaningful one for two years).  But sooner, or later, something will have to be done about inflation.  We will close this Part I with a quote from Jim Rogers, the commodity guru (Barron’s, October 12, 2013):

The price of nearly everything is going up.  We have inflation in India, China, Norway, Australia – everywhere but the U.S. Bureau of Labor Statistics.  I’m telling you, they’re lying. 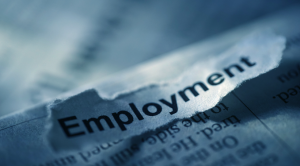 PrevPreviousPart II: The Long-Term Outlook – Even a Strong Economy Doesn’t Change the Ultimate Outcome
Next8 U.S. business predictions for 2014Next