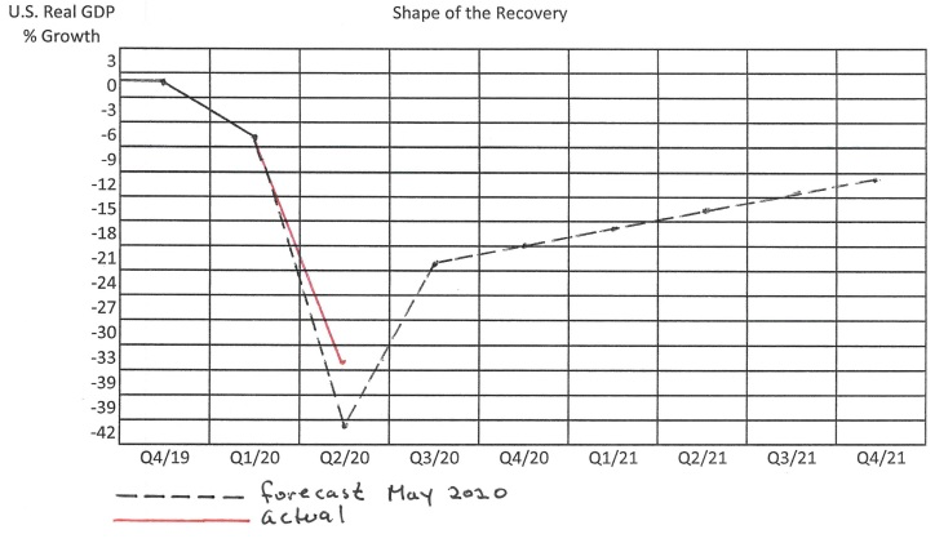 In Greek mythology, Scylla and Charybdis were mythical sea monsters existing on the opposite sides of the Strait of Messina, between Sicily and the Italian mainland.  Scylla was a six headed sea monster; Charybdis a huge whirlpool.  Because they were so close together, any passing ship was threatened.  In Homer’s Odyssey, Odysseus passed close to Scylla, losing only a few sailors rather than risking losing his whole ship in the whirlpool.  The equivalent colloquial English jargon is “between a rock and a hard place.”

But, I like the Scylla/Charybdis analogy better because there is the idea that one can actually navigate through, and not just caught in a trap.  And, that is where the economy is today.  The second quarter GDP fell 32.9%, and, while it was not as bad as the 34.5% consensus estimate, it is, still, by far, the worst plunge in any quarter in modern history and likely all of U.S. history.   This is because, early on, it was thought that the virus could be conquered if few got infected and that summer heat would slow or kill it (like the typical flu).   The chart above shows my original and early estimate of the path of GDP (i.e., -40% in Q2, some bounce, then a long slow grind).  As it turns out, the bounce began in late May/early June, so the original downdraft was not as great as I originally thought.  The red line shows the actual fall.

Should the economy completely re-open?  Should it close down completely until the virus dies out or transmission rates are minimized?  As everyone knows, our recent experiences with re-openings have spiked infections (or maybe we are just testing more?).  In some hot spots, deaths and hospitalizations have risen.  In parts of Texas, they have had to resort to portable morgues.  We have recently seen surges in Latin America.  Mexico is now the world’s third most intense hotspot.  Germany (July 29) posted the highest number of cases in six weeks.  In Italy, the infection rate is now back above 1 (meaning a person who has the virus infects more than one other) and the national government just extended their Covid-19 emergency decree to October 15 from July 31.  Australia also recently recorded a new high in its daily count.

Could it be that because of the high level of contagiousness, any re-openings will spike the number of infections?  If so, the choices are ugly: a) close the economy and wait either for the virus to die out, or for a vaccine, or b) open the economy, like Sweden did from the get go, caution the elderly and vulnerable, and move to herd immunity.  If the former is chosen, it is likely we will need many more CARES type acts from Congress (i.e., helicopter money) with the Fed ending up holding much of the “zombie” company paper.  If this path is chosen, most small businesses will fail, double digit unemployment will become the norm, and we will be on an even faster path to the “nanny” state.  The dollar would lose its reserve currency status and all the benefits that accompany that status.  If the choice is to follow the path that Sweden took, we would head toward herd immunity.  A vaccine or a treatment breakthrough would clearly be the best outcome.

In a blog I wrote in early May, I noted that:

… as Europe was shutting down, Sweden decided to follow a different route.  They cautioned that mortality rates were higher in the elderly demographic groups, and they emphasized social distancing.  But, they left it to individual businesses regarding closure.  Most stayed open.

Given that Sweden’s death rate doesn’t appear to be significantly higher than those neighbors who closed down their economies, perhaps governments ought to consider immediately reopening economies, a la Sweden, in low density states or counties.

I got some blowback from those observations because Sweden’s death rates were higher than their Norway and Finland neighbors at the time.  Let’s move forward in time, about 3 months.  In the lead editorial in the July 29th Wall Street Journal entitled “The World’s Covid Resurgence,” the editorial read:

Amid the post-lockdown flare-ups, it’s worth revisiting Sweden, which has been widely criticized for never closing businesses and primary schools.  Cases have been falling over the past month after a modest uptick in June due to more testing.  Only 27 patients died in the last week, fewer per capita than New York.  … [Sweden has a] relatively high death rate (56 per 100,000 compared to 45.1 in France and 35.8 in the Netherlands).  But two-thirds of deaths have been among those over age 80, and 97% never received intensive-care treatment.  Blame Sweden’s socialized health system, which rationed treatment for the elderly even through ICUs were never overwhelmed.  The lesson is that the virus won’t disappear anytime soon.  Governments may have to impose some business and social restrictions to protect hospitals and the vulnerable.  But lockdowns aren’t a miracle cure, and their collateral damage is too severe to sustain.

Scylla and Charybdis!  A rock and a hard place!  That’s where the economy is today.  With the pauses and/or re-closings, all of the high frequency data are pointing to another economic stall-out after the initial re-opening upsurge.

I have indicated in all of my blogs in the Covid-era that employment is the real key to the state of the economy.  Markets watch the weekly employment reports.  The July 30 report did bring with it some disappointment as the headline number for Initial Claims (IC) rose by +12,000, from 1.422 million to 1.434 million.  Continuing Claims (CC) also rose +867k, from 16.151 million to 17.018 million.  These headline numbers are seasonally adjusted (SA).  Because we are in such unique circumstances, seasonally adjusting the numbers without any prior historical periods of similarity makes no sense at all.  The seasonal factors just fog up what is going on.  And that is what partially happened this past week. 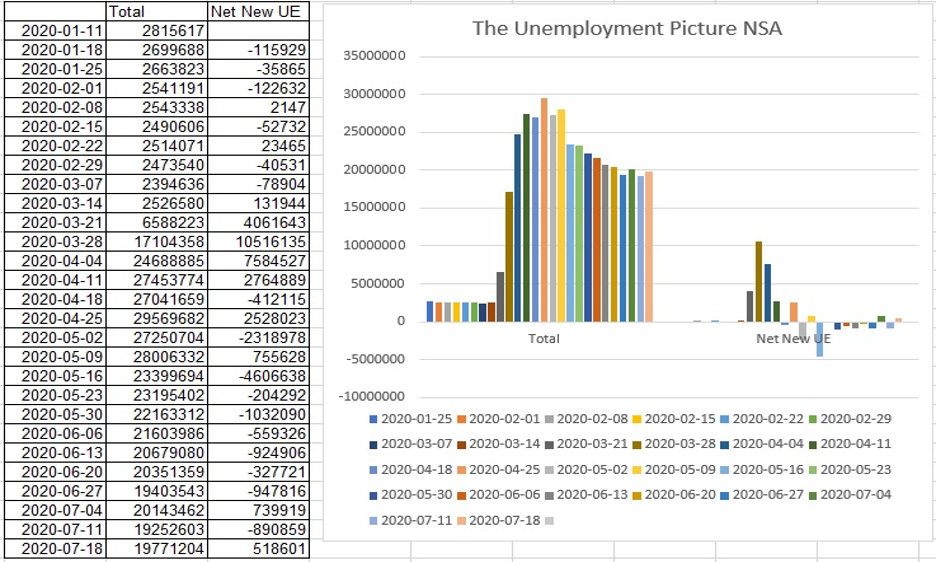 No doubt due to the re-opening pauses and the realizations on the part of businesses that the recovery was not going to be “V”-shaped (as chronicled in these blogs), and that the real pain of the Recession has yet to be felt (i.e., is “down the road”), new large layoffs were announced in July (United, Delta, L-Brands…)  As shown in the table, the state unemployment totals are nearly 20 million.  The slope of the decline in unemployment has all but ended (see chart).

Unfortunately, we can’t just add in the PUA data (Pandemic Unemployment Assistance – part of the CARES Act legislation to benefit the self-employed and independent contractors) because it is inconsistently collected and reported.  So the changes and trends may not have significant meaning.  But, adding the two together, as shown in the table and chart below, does give us an approximation of the total unemployment level caused by the virus and business shut-downs.  We are still over 30 million.  Many small businesses have already closed, and there will be a ton more as the Recession’s pain is felt.  The number of small businesses that have already closed, as documented by Yelp and others, indicates a permanent loss of 5-6 million jobs, even if we re-opened the entire economy on August 1.  More hurt to come here.

This blog has also been closely following bankruptcies, which, as can be seen from the table and chart, have risen and recently have accelerated.  As of July 31, the Bloomberg data base of publicly traded company BKs stood at 150 (California Pizza Kitchen being the latest well recognized name).  This translates into an annual rate of 275, about double that of 2019.  With BKs, not only are there layoffs, but there is debt destruction (i.e., bondholders are impacted).  It appears that such debt destruction is going to be an issue the Fed and markets are going to have to deal with once the real impacts of the Recession occur (likely 2021).

At its meeting last week, the Fed undertook no new actions but did tamp down the view that the recovery was proceeding smoothly.  At the press conference, a seemingly nervous Chair Powell pledged to extend accommodation for as long as it is needed (similar to the “whatever it takes” famous comment from the ECB’s former President, Draghi).