The question is, “Is inflation coming back?”  The answer is: “yes,” if central banks keep doing what they are doing – it’s just not coming back anytime soon, especially with the economy struggling.

Interest rates are notoriously sensitive to inflation.  To induce people to hold bonds, such paper must yield a real rate of return.  That is, the total return consists of expected inflation and a “real” return.  One reason for rates to rise is if the “expected” or “anticipated” rate of inflation rises.  So far, in all of the major surveys, consumers don’t expect inflation to rise over the various different time horizons.  So, why did rates back up last week?  Two reasons: 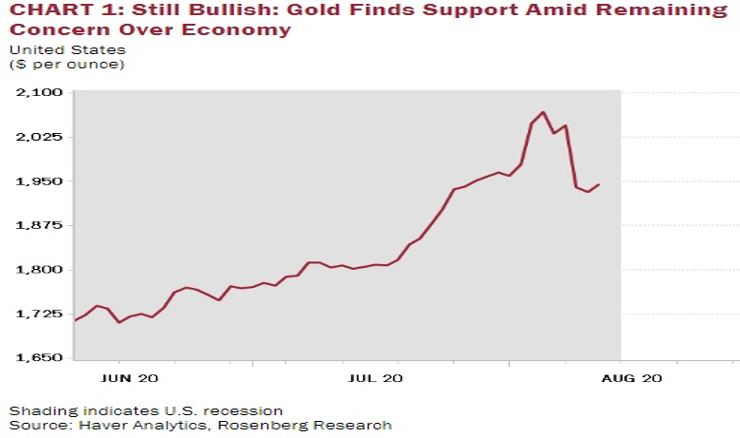 Yes, clothing prices rose in June and July, but, they are still off at an annual rate of -14% since February.  Airfares, too, while up modestly in June and July, are still off -50%.  And, we see one anecdotal piece of evidence after another of similar occurrences.  For instance, Manhattan apartment rents are down -10% Y/Y and vacancies are at an unheard of 4.3% level (records have been kept since 2011). 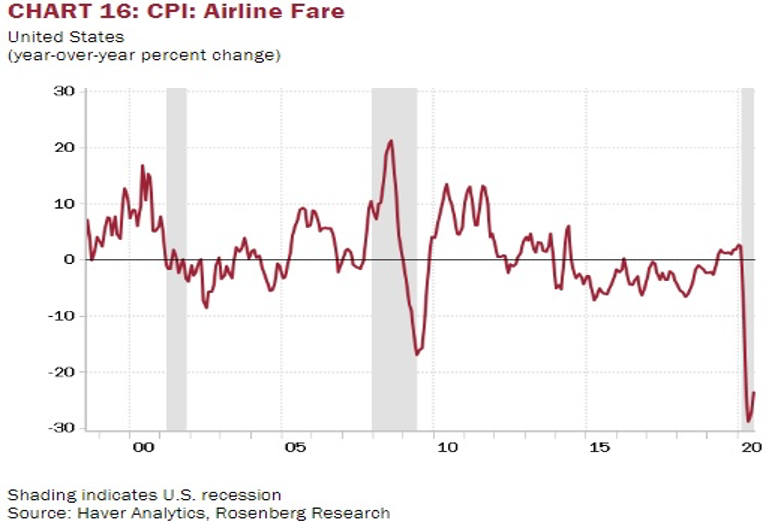 Inflation simply doesn’t occur when there is slack in the economy, i.e., high unemployment or excess production capacity.  The unemployed simply don’t spend as much.  Consumer attitudes toward spending and savings have changed radically since the start of the pandemic.  Since February, we have seen the savings rate skyrocket to nearly 20% from a 7% base, and reports indicate that only about half of the helicopter money from the CARES Act has been spent.  Consumer credit outstanding has plunged (chart), down more than $100 billion since February, about 75% of which is in the form of lower credit card balances. 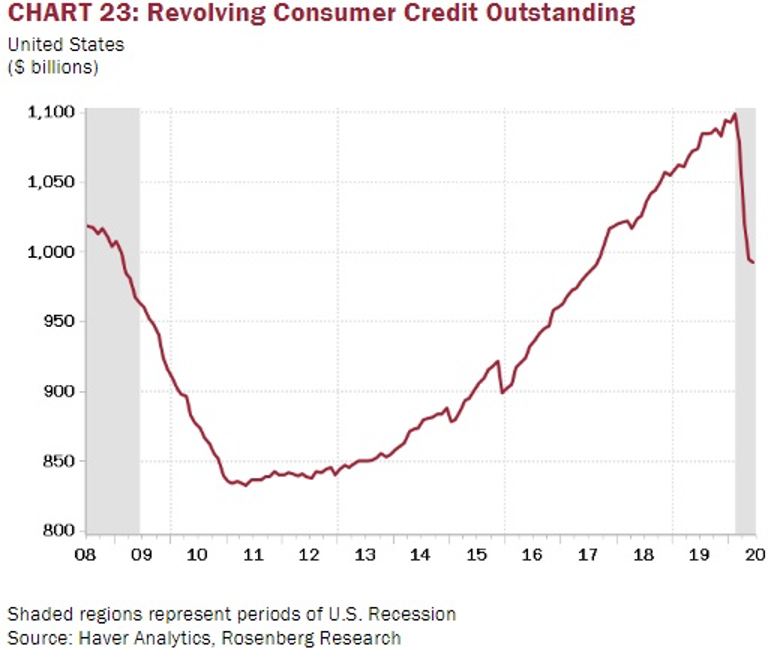 Capacity utilization is at 68%.  It doesn’t ever get much lower than that.  Producers have little ability to raise prices because there are others with idle capacity ready to compete for the available demand.  Normally, inflation isn’t an issue until Capacity Utilization approaches 80%.

The Congressional Budget Office (CBO) sees a significant output gap for the next few years, i.e., Actual GDP will be significantly less than Potential GDP.  The chart shows that periods of high inflation, like the 1960s and 1970s only occur when the economy is running hot, i.e., Potential GDP > Actual GDP. 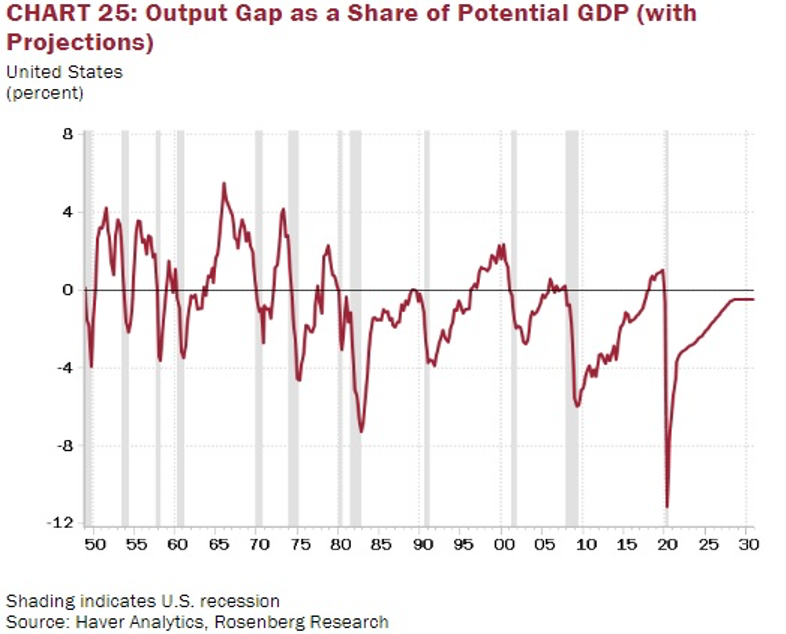 How does the current situation (M2 growth of 23% Y/Y) square with the quotation from Milton Friedman about money printing being the ultimate source of inflation?  It is still true.  But Friedman also recognized the Fisherian tautology:

Where: M=money supply and V its velocity or the number of times it is spent in a year.

If the quantity of money is spent twice in a year, then the GDP will be twice the size of the money stock.  If, in late 2019, the Fed increased the money stock by 23% into the teeth of a fully employed economy, we certainly would have seen plenty of inflation.  And I can say that if the current 23% Y/Y money supply growth had the same turnover post-virus as it did pre-virus, then we certainly would have inflation.  But, what has happened in the pandemic months is that velocity has fallen (-23% Y/Y) almost exactly as fast as the money supply has grown.  One offsets the other and leaves us with relatively stable prices. 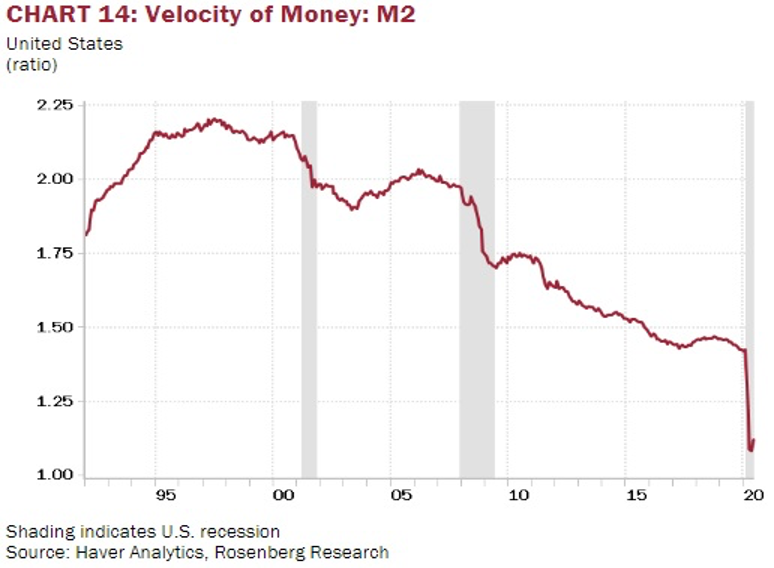 The next chart shows the sectors bearing the brunt of the current deflation (i.e., airlines, energy, hotels, apparel). 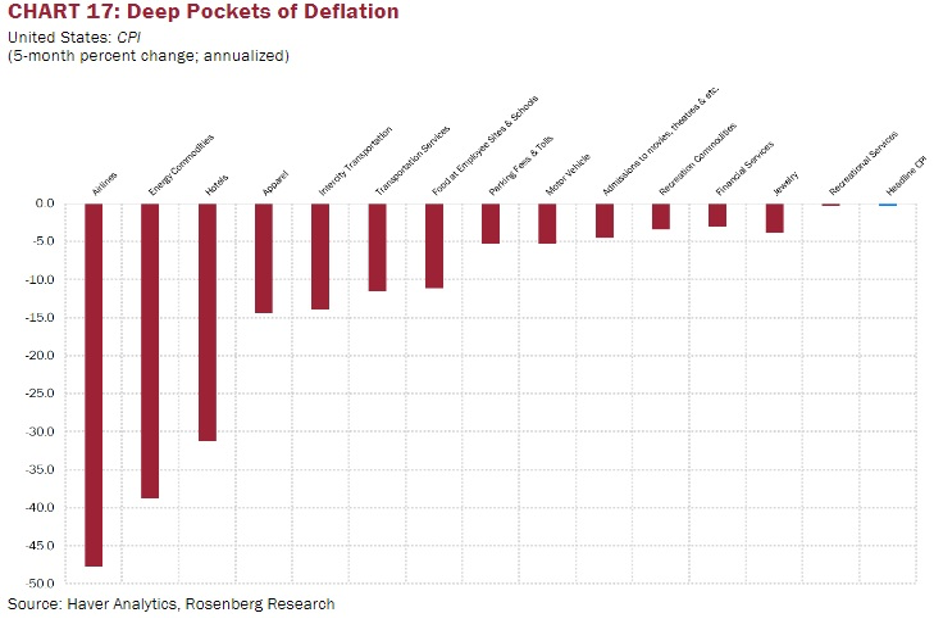 No doubt, when the economy actually heals, i.e., when the unemployment rate is much lower and production capacity utilization is nearing 80%, unless the Fed removes the excess money it has created, inflation will return.

For the last couple of months, as gleaned from Fed minutes, discussions are ongoing regarding a change in the Fed’s 2% inflation target.  For the last decade or so, the official policy was to get inflation to 2% and stabilize it there.  Thus, when 2% was achieved, the Fed would begin a monetary tightening process (negative money growth which reduces bank reserves and/or raising the Fed Funds rate, the rate banks pay for those overnight reserves) to prevent inflation from rising further.  At the next set of Fed meetings (September 15-16), it appears that a policy change will be announced regarding the 2% inflation target.  Instead of 2% acting as a ceiling, it is expected that the Fed will announce that the 2% inflation target is now a “long-term” average.  Since inflation has been well below 2% for the last few years, it is expected that the Fed’s new policy will allow inflation to be above 2% for some period of time.  This, they will say is not only “tolerable,” it is “desirable.”  This adoption will occur because they are worried that when inflation starts to show up, the economy may still have considerable employment and production slack, and tightening prematurely may derail the expansion. [As a side note, let’s not forget about the Fed’s unwritten third objective, protection of financial markets (full employment and price stability are the written ones), as the Fed believes that the “wealth effect” plays a vital role in the health of the economy.]

On Thursday, August 13, the headline Initial Unemployment Claims (IC) for the week ended August 8, was 963k.  The media was all over the fact that this was the first time since early March that ICs were less than a million.  As has been the case since the pandemic began, this headline number has been “seasonally adjusted” (SA).  Readers of this blog know that seasonal adjustment simply makes no sense because business shut-downs don’t occur seasonally.  Such adjustment biases the numbers.  I had to smile, as I had penned last week that the non-seasonally adjusted number from the August 1 week (984k, since revised to 988k) was the first time since March the ICs were less than a million.

Once again, the more reliable non-seasonally adjusted (NSA) state IC number for the latest week (August 8), at 832k, was -131k lower than the SA number.  In addition, the NSA Continuing Claims (CC) number was -280k lower than the headline SA number.  The NSA numbers are simply more accurate.  As seen from the chart, after flattening for most of July, the decline in unemployment has re-emerged.

Not to get too excited, though.  Despite business re-openings, new weekly claims (ICs) are still above 800k.  This is more than 4X higher than when the economy is stable and growing at or near its potential.  It is likely that, the ending of PPP, and the realization by large employers that the virus is not a one quarter phenomenon, are the reasons that ICs are still this high.  In addition, the high frequency data (same store retail sales, TSA checkpoint data, OpenTable reservations) all point to a leveling of economic activity in late July and August, coincident with the rise 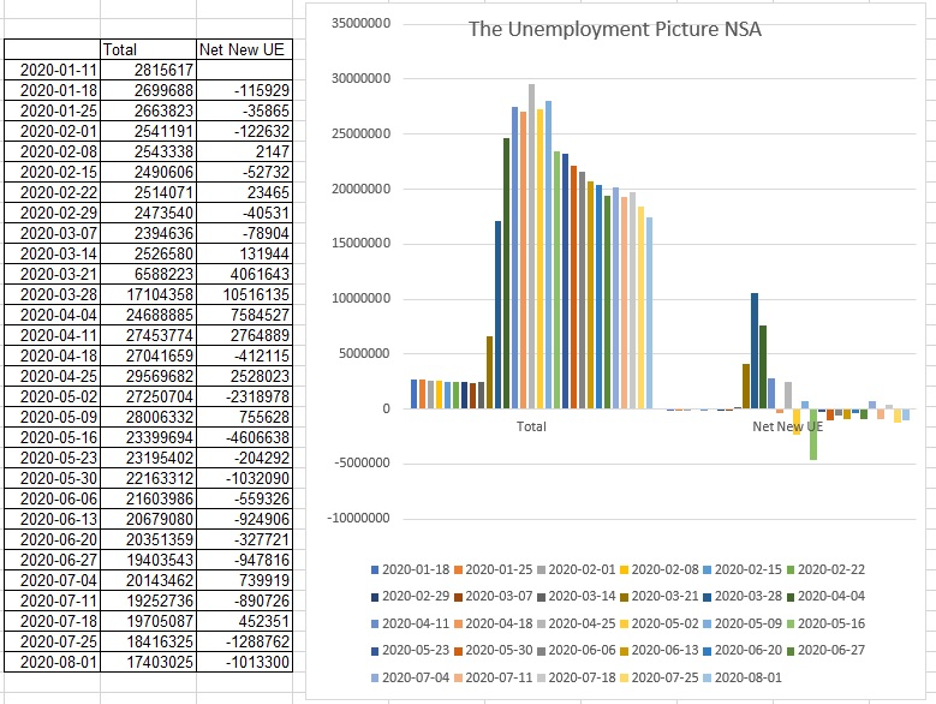 in virus case counts and slowdowns/reversals of business resumption in some states.  All of this indicates that the August data, including sales, employment, and production, are likely to disappoint.

The BK table and chart that has appeared in this blog for the last few months continues to show a rise in BKs of publicly traded companies, Stein Mart is the latest well-known name to file, joining the ranks of Pier 1 Imports, Neiman Marcus, J.C. Penney, J. Crew, Brooks Brothers…

Yelp says that more than 80k businesses permanently closed between March 1 and July 25.  60k of these were companies with fewer than five locations.  Eight hundred small businesses did fie BK from mid-February to the end of July, but most that closed had no need to file because they had no debt.  (It’s just futile to remain open when a business can’t break-even due to social distancing requirements.)  Just for context, small businesses (<500 employees), account for 44% of economic activity, and employ about half of the working population.  The table shows closures by business types.  No surprises here!