In 2013’s end of year missive, we commented that 2014 would be an up-beat year for the U.S. economy, and it looked like that could last through 2015. Now, as we near the last days of 2014, we see an even stronger underlying economy for 2015 and believe that it will last through 2016 barring any exogenous shocks. We have included a table of economic indicators which we will reference in the text below. Nearly all of them are “green.”

Every indicator in the labor market area of the table is green. In 2015, we believe the labor and skill shortages, already apparent in some industries, will worsen, and this will finally accelerate the growth rate in wages. Here are some highlights:

Industrial Production set a record in November (106.7; 2007 = 100), up 1.4 index points from its October level (105.3). If you care to extrapolate, that monthly change translates into a 16.2% annual growth rate. Looking back 12 months, this index grew by 5.2%; we haven’t seen that kind of annual growth since 2010, when the economy was recovering from the depths of the recession.

Its sister indicator, Capacity Utilization, was above 80% (80.1%), a level generally indicating strain, as to produce more requires overtime, additional shifts, and the use of older and obsolete plant and equipment. This implies rising capital expenditures in the near future, excluding the oil and gas sectors. Both ISM indexes, the Manufacturing and the Non-Manufacturing, are nearing nose bleed territory.

For the first time in a year, outstanding mortgage debt, which nets out repayments, expanded by $14.4 billion for 1-4 family residences in the third quarter. Except for the third quarter of ’13, repayments have outstripped new debt in every other quarter since the second quarter ’08. In addition, in November, homebuilder sentiment was up significantly. So, while not hot, housing is beginning to show solid underpinnings.

In the past 5 years, all of the rules in the financial system have changed, putting high quality fixed income assets in such demand that interest rates in the medium and long-term portions of the yield curve cannot rise. To be sure, the Fed can push up short term rates (0-2 years) and will likely begin to do so in 2015. But, high quality fixed income assets with 4+ years to maturity are not likely to show any more yield in 2015 than they have for the past 5 years. (Junk bonds, on the other hand, are a different story.)

For certain, the huge decline in the price of oil will have a large, favorable impact on the health of the consumer. Attached to this analysis is a special report on the impact of falling oil prices on the U.S. economy. Just to show the power of falling oil prices, in November alone, retail sales excluding motor vehicles and food, grew 4.26% from a year earlier. Similar growth has not been seen for more than two years. For some economic commentators, and maybe even for the Fed, falling oil prices leads to the dreaded “D” word (“Deflation”), which the Fed seems motivated to avoid at all costs. But, there is a huge difference between “good” and “bad” deflation.

Deflation is “bad” when it is the result of falling demand (usually due to a recession or to falling incomes). In this case, the same level of production of the good as in the past is now too high for the old equilibrium price. To reduce supply, less production is needed which only exacerbates the recession.

Deflation is “good” when demand is buoyant, incomes are rising, and, due to technology or other exogenous forces (even dumb luck), the supply of the good is rising faster than the demand. “Good” deflation actually expands consumer purchasing power. To be sure, not every sector of the economy benefits, as those supplying the good now face significantly lower prices. But, in general, this type of deflation is more beneficial than hurtful.

In the world today, we have both good and bad deflation. In the “bad” camp is the fact that the worldwide demand for oil is falling. This is occurring because there are industrial economies that are facing recession including Europe, Brazil, Japan, Russia, and in some sense, even China. For the U.S., however, the fall in the price of oil has led to “good” deflation. In the U.S., there is no imminent recession, nor is one looming on the horizon. Falling oil prices only reinforce rising incomes in the U.S.

Because of our worry that the withdrawal of capital from the fixed income and specialized product markets will cause extreme price volatility when economic or political issues arise, we still do not recommend a full allocation to fixed income; and while we think that using high quality, professionally managed fixed income funds with 4-5 year durations is okay for a while longer, perhaps even though 2015, we still recommend vigilance.

Given that most businesses are energy consumers, not energy producers, the reduction in the price of oil will either lead to larger profit margins, higher wages, or lower prices (perhaps, some of each). The impacts here are likely even larger than the benefits of lower gas pump prices which we estimated could be as large as $260 billion (see the attached companion piece (“A Bear Market or ‘Buy The Dip’; What to Expect from Falling Oil Prices”). Nevertheless, there is going to be an impact on the economy from a pullback in the oil and gas sectors which will probably work to slow growth in 2015’s second half.

A tight labor market, strong industrial production, stable interest rates, rising incomes and falling oil prices leads us to the conclusion that economic growth in 2015’s first half will be stronger than that of 2014, perhaps even exceeding 4%. The growth rate in 2015’s second half is less clear due to the emerging issues in oil and gas. Only time will tell. Maybe the equities markets have already priced all this in – but, since we don’t see a lot of pundits forecasting 4% real economic growth for the near-term, we doubt it. 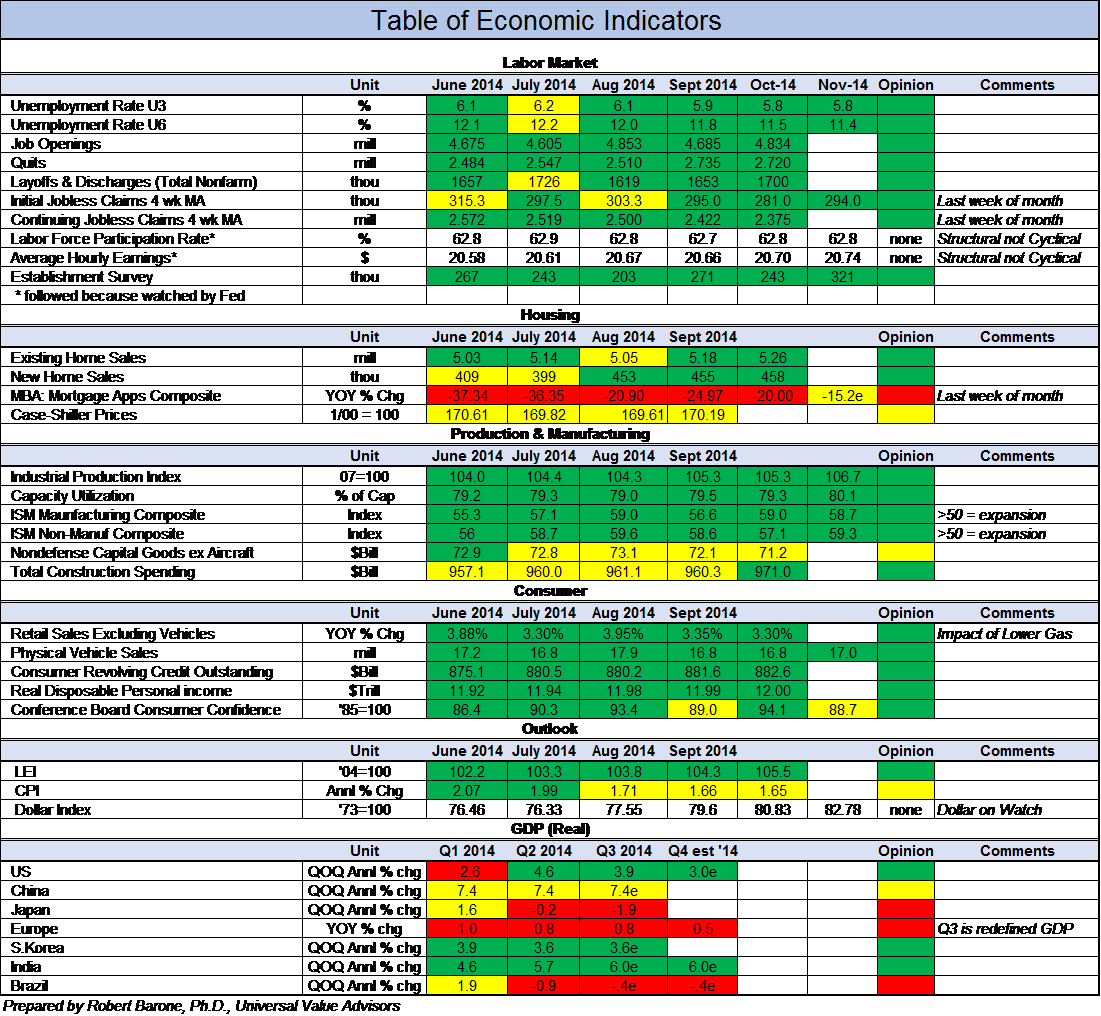 What to Expect from Falling Oil Prices

U.S. equity markets appear to be reacting as if there won’t be enough oil. The fact is, at least temporarily, there appears to be more supply than demand, even at prices more than 40% off their recent highs. As prices fall, the world will use more, and that will actually spur economic activity.

Sometimes, markets just need to correct, and use a current event or trend as a triggering mechanism. But, bear markets in equities usually occur when recessions are approaching. There is no looming recession on the horizon, at least for the U.S. Labor markets are strong and tight. Industrial production is at record levels. Leading indicators are up; inflation is benign. Corporate profits are high. Holiday consumption appears buoyant, no doubt spurred by falling oil prices.

The Importance of Oil and Gas

Clearly, with falling prices, there will be some fallout in the oil and gas industry and its periphery. Some market commentators worry about the impact that such fallout will have on the economy, employment, and capital spending. No doubt some small drillers and marginal enterprises will be impacted, perhaps even file BK. Capital spending in the industry will fall precipitously, both in the U.S. and worldwide. (That seems to be the objective of OPEC in keeping production levels high.) So, it is critical to examine the importance of this industry to total economic activity.

In 2013, Gross Output (GO) was approximately $30 trillion.   This measures all aspects of economic life and includes all B to B sales (not just value added or final output which is what GDP measures). For comparative purposes, 2013’s GDP was $16.8 trillion. Business spending represents about 52% of GO, Consumption 38%, and Government 10%. Looking at the Bureau of Economic Analysis’ Input/Output Table for 2013, the Oil and Gas industry directly produced 2.0% of GO. In addition, other industries sold about 0.4% of GO to the oil and gas industry. So, while it is important, a recession in 2.4% of the economy isn’t going to stall the other 97.6%, especially when nearly every aspect of that 97.6% will directly benefit from lower oil prices, at least, in the short-run.

Who Benefits from falling Oil Prices?

In the short-run, at least, a dramatic fall in the price of oil benefits consumers in most developed countries. No doubt, some countries that are export dependent on oil, will suffer. The Middle East, Canada, Mexico, Venezuela, Russia, and Brazil all come to mind. But, most of the rest of the world are oil importers and stand to benefit. The U.S. consumer, in particular, will benefit from falling prices, as, of all major industrial countries, the U.S. is the most dependent on autos and trucks for transportation. For U.S. consumers, the fall in the price of oil is equivalent to a huge tax cut, or to a one-time rise in wages. Every penny of price decline at the pump is worth about $1.5 billion per year to U.S. consumers, according to Gluskin-Sheff’s David Rosenberg. As of 12/12/14, according to AAA, the national average price of regular unleaded gas was $2.600. A year earlier, that price was $3.253 indicating that the price had fallen $0.653, or about 20%. Given that crude prices are down more than 40% over the past year, and likely headed lower, an equivalent fall in the price at the pump would put prices there at about $1.95, and would be worth about $200 billion to U.S. consumers, and is equivalent to a 1.5% rise in Disposable Income. It appears likely that pump prices will get to $1.50 in some parts of the country by spring, and if they average that level, American consumers will have received an injection of $260 billion. And that is just at the pump. Imagine the total benefit that all non-energy producing businesses will receive, from airlines and trucking to the pizza delivery service. Just think of a) expanding profit margins in these businesses and/or b) falling prices to consumers for those services. (I know the Fed doesn’t like falling prices, but if such prices fall because costs have gone down and profit margins have been maintained, then there is no reason for wages to fall, and the middle-class employee benefits from the falling price, even without a wage increase.)

There is some concern in the markets, however, because oil and gas has led the growth of the U.S. economy for the past few years. The concern revolves around the question of what impact lower oil prices will have on aggregate employment. And there is no doubt that there will be an impact, most likely beginning in 2015’s second half. While it is too soon to say exactly what that impact might be, it is likely that there will be a slowing impact on economic growth.

Nonetheless, given the benefits, it is hard to see how the issues in the oil and gas industry could tip the U.S. into recession. It is equally hard to see how the next 6 months’ growth rate in GDP won’t be 4% or better. How does this translate into equity market prices? “Buy the dips!”