I received an email from my travel agent last Monday (March 2) informing me that, because Italy had been raised to a Travel Level 3 by the CDC (strongly advised not to travel there), our vacation to Italy (March 12-22) had to be postponed, else we risked being quarantined upon our return.  In addition, the previous Friday, two corporate meetings in my immediate schedule for the week in the SF Bay area were changed from physical presence to telephonic.  This was my personal experience as a result of the coronavirus; but think of all of the businesses cancelling meetings, and the impact on the economies and businesses of the destinations.  In addition, think of the cost to nearly every mid-sized and large business to have to deal with keeping employees safe, including working from home, paid time off if an employee feels ill or for school closures, increased cleaning/sanitation costs, meeting cancellations ….  This list goes on.  The “Avoidance” Reaction is alive, well, and in full force and effect.

Some Things Don’t Add Up

The Wall Street Journal (WSJ) headline on p. A-7 of its March 5th edition read: U.S. Death Toll From Coronavirus Rises to 11.  As of March 6th, as I write, the U.S. death toll has risen to 14, and there are 340 known cases in the U.S. according to Johns Hopkins University.  And, surely, there will be more.  But, let’s remember that there are more than 330,000,000 people who live here.

About two years ago (February 9, 2018), there was a Bloomberg headline that read: Flu Is Causing 1 In 10 American Deaths And Climbing.  The sub-head read: … this year’s epidemic may be killing 4,000 people every week.

While the current state of anxiety here and abroad has caused (just to name a few),

a run on hand sanitizers and other consumer staples (Costco had record sales of such items the last couple of weeks); school closures in some U.S. cities (and in the entire countries of Italy and Iran); cancelled business meetings, concerts, conventions vacations; $8.3 billion in new U.S. spending to fight the virus; and $80 billion from the IMF, most people in the U.S. do not get an annual flu shot (WebMD says only 5% to 20%), despite the fact that, so far, the annual flu is much more deadly!

The Coronavirus is no laughing matter, but the reaction to it seems quite overdone when compared to the annual (ho-hum) flu!

Let’s Get The Data Right!

On a daily basis, we see the global case count (102,000 as I write, and surely higher when you read this).  While this data is nice to know, it is not the data that is important.  Some of those cases originated in December and January.  Most of those who had it back then have recovered and are no longer infectious.  The relevant data is the number of “active” cases.  That data exists, but it isn’t widely reported, and I had to dig for it.  The chart below shows that the number of “active” cases worldwide peaked on February 17th at 58,747, and, by March 4th had fallen to 38,501 (with a slight rise to 39,425 on March 5th).  This is less than 40% of the headline 102,000 number! 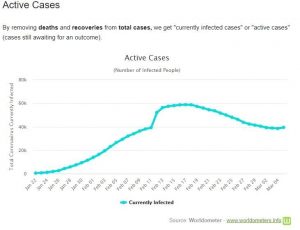 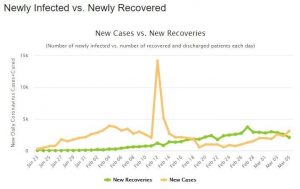 In addition, the media reports, sometimes hourly, the number of deaths (3,491) as I write.  Are we supposed to assume that all age groups are equally susceptible?  The table below shows that there are almost no fatalities in younger cohorts, with most of the danger being in the elderly populations.  For example, 14.8% of those over 80 years old who contract the virus are likely to die, while the death rate for those under 40 is 0.2%.  So, not only is the probability of contact low, but the death rate in the working age population from the virus is also quite low. 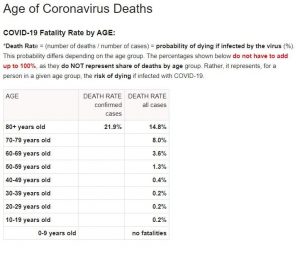 The annual flu outbreak in the U.S. occurs in the winter months (we call it “flu season”).  It recedes in the summer.  The CDC says it doesn’t know if this will be the case for Covid-19.  But the map below would appear to indicate that this might very well be the case.  Note that the number of cases in the southern hemisphere, where it is summertime, are significantly lower than the case count in the northern hemisphere. 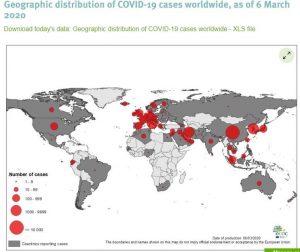 Due to the reactions of governments, businesses, and households to the outbreak of this virus and its very contagious nature, the economic impacts will be quite significant.

Most of the hard data we have so far appears irrelevant, as it was pre-virus concern.  The data we get for March and beyond will begin to tell us how deep and long the economic impacts of the “Avoidance” Reaction will be.  We won’t really start to get that data until April, so until then, we can only try to glean and guess.  Because of these uncertainties, the equity market appears to be in panic mode.  The bond market, on the other hand, is convinced that the economic impacts will be serious.

Sometime in the near future, this virus threat will recede.  Sometime after that, the “Avoidance” Reaction will also recede.  Just a word of caution.  Like the Northern California wildfires, which seem to reappear every summer, investors and those who run or manage businesses should prepare for the reappearance of this virus or something similar in the future, i.e., this is not just a one-off event.  The economic implications are also serious.  In a world of slowing growth, bouts of anxiety and the “Avoidance” Reaction will only further slow that growth.

PrevPreviousCoronavirus: The Black Swan
NextThe Recession Has Arrived, & with a VengeanceNext